Trucking’s 10 Biggest Concerns…and How to Fix Them 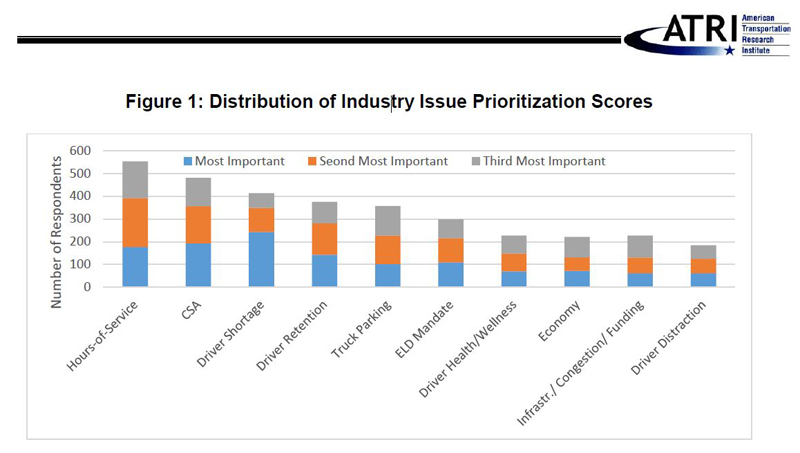 2015 sure has been an interesting year for trucking hasn’t it?  From regulatory concerns and changes to a shrinking workforce and record-shattering pay the trucking industry has certainly been anything but quiet.

To bring the public up to date the American Transportation Research Institute (ATRI) released a report outlining the industry’s ten biggest concerns gathered from stakeholders carriers and most importantly drivers. But don’t fret these issues weren’t glossed over; the ATRI addressed these issues by offering solutions.

Here are the top ten concerns (with solutions) in the trucking industry according to the 2015 survey.

The Hours of Service rules requiring a 34 hour restart have been suspended pending further review but that doesn’t stop them from being a top concern. In fact this is the third year HOS has topped the list of concerns. If reinstated the HOS rules would be a significant change for the industry. ATRI estimates 80 percent of trucking companies experienced a loss of productivity with driver pay affected somewhere in the $1.6 to $3.9 billion range.

The Solution: The ATRI hopes members of the trucking industry will continue to advocate for the suspension of the restart provision until the effects on both roadway safety and the economy have been documented. Further research to truly measure how the 34-hour restart provision affects trucking safety as well as the economy is necessary.

Research suggests that the current way CSA guidelines measure and score drivers aren’t actually a good predictor of crash risk. There are also some differences on how the information is collected from state to state. The possibility of shippers misusing the data when they choose a carrier is also a big concern.

The solution: ATRI encourages drivers and industry leaders to push for changes to the accountability process by taking into consideration crashes that could not have been prevented by the driver. Removing these incidents such as being hit by a drunk driver or another vehicle running a stop sign from the scores would be a step towards making the system more accurate. Pushing for scores to remain private until they are more predictive of risk and using findings from recent Department of Transportation and Government Accountability Office would also help.

According to the American Trucking Associations the driver shortage is now about 48000. That number is expected to jump to 175000 in another ten years.

The Solution: A large portion of the driver shortage is due to retirements—most study respondents suggested that adding a graduated Commercial Driver’s License for young adults age 18-20 would help bring in more young drivers who would then receive their full CDL at age 21. Research into the best recruitment strategy and and a formal program with the Department of Labor are also potential solutions.

The solution: Most survey respondents suggest finding and sharing the practices that help improve aspects such as work/life balance healthy lifestyles and family life. More research should also be done in driver compensation and how it relates to productivity and retention. Programs that reward drivers for things like safety fuel economy and productivity could also encourage more drivers to stay long term.

The availability of truck parking is a top issue since the decreasing availability of spaces can force drivers to continue after they’re reached their limit or to park in unsafe locations.

The solution: Most respondents would like to see more financial support for truck parking facilities since many closed down due to state budget cuts. Educating the public on how those budget cuts affect safety and creating a real-time parking information system are also possibilities.

The trucking industry is still waiting on a final ruling for the ELD Final Rule. Once the ruling is released just how the ELD will affect the industry will be easier to determine. The rule is expected in mid-November.

The Solution: Survey respondents suggest ensuring costs stay low by ensuring paper copies are not required and that existing devices remain allowed for a short time. Keeping the implementation window at two years will also help.

Driver health is a growing concern receiving its highest ranking on the study this year. There’s a connection between driver health and retention as well as lifestyle benefits and safety on the road.

The Solution. Most of those surveyed suggested increasing the availability of exercise facilities as well as healthy food options at truck stops and travel plazas. Many fleets have implemented their own health program for drivers and additional research would also be helpful.

While economy certainly isn’t new to the list it takes a much lower spot than previous years though up one from last year. That’s likely due to a small decrease in freight demand recently.

The solution. Most of those surveyed suggested advocating to adjust rules that add to the cost without adding any benefits as well as promoting policies that help the economy overall.

Maintenance of roadways as well as preventing traffic congestion is also a concern in the trucking industry. In the most recent data available (2013) traffic jams cost companies $9.2 billion.

Solution: Increasing roadway funding through increases in fuel tax and similar fees is the solution favored most as well as preventing road funds from being used on other unrelated projects. Creating a new funding program to focus on major freight routes is also a possible solution.

Increases in technology mean an increasing concern over distracted drivers both by commercial drivers and by other users of the same roadway.

Solution: While every state restricts cell phone use while driving in some way it’s not universally enforced. Stepping up enforcement would help as well as offering solutions for safe technology usage in the cab. Continued research was also a suggested solution.

While the economy no longer tops the list HOS regulations CSA guidelines and the driver shorter are among the top concerns in the trucking industry for 2015. Additional research as well as advocating for legislative changes are among some of the top solutions across the board.

What are your thoughts on trucking’s 10 biggest concerns? Do you agree with the list? Is there a concern that wasn’t mentioned? Share with fellow truckers on Class A Driver’s Forum.

Source: ATRI
About The Author
Classadrivers.com