Self-Driving Trucks Are Here: Is Your Job Safe? Well it’s not a jetpack but our lives just became a bit more futuristic (and safer) with the introduction of the world’s first self-driving truck. Daimler Trucks North America displayed their state-of-the-art truck during a ceremony at the Hoover Dam this past Tuesday promising a vehicle that will help the trucking industry along with its drivers and everybody involved on the road.

However there is no reason for truck drivers to worry as these vehicles aren’t meant to replace drivers. Drivers are still required to operate the vehicle while on the streets and while entering and exiting highways.

All parties involved would seem to benefit from the self-driving trucks; drivers would be able to complete other tasks while on the highway such as tracking inventory and scheduling routes trucking companies would have consistent fuel efficient routes and drivers on the road would be within a much safer environment. 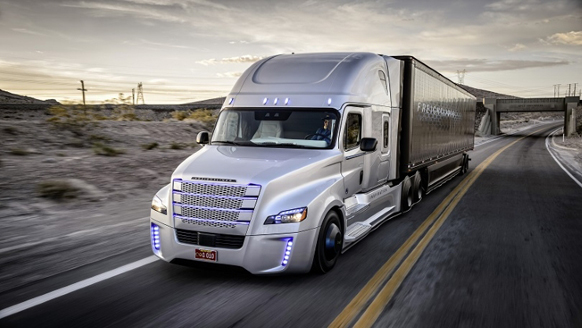 In terms of safety Daimler’s truck is considered a 3 on the National Highway Traffic Safety Administration’s automation scale which is its second highest level. Daimler has stated that these trucks have gone through over 10000miles of testing on the circuits in Germany.

Due to Nevada’s friendly regulations it was the only state that has allowed testing and has now officially granted a license for these vehicles to hit the public roads. States such as California Arizona and Michigan have shown interest.