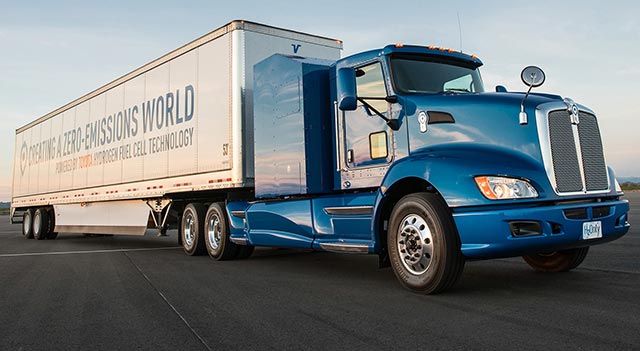 After teasing the public late last year this Japanese automaker will be testing an emission free Class Eight tractor this summer.

Toyota Motor North America has officially unveiled the product of “Project Portal” a Class 8 tractor with a hydrogen fuel cell system designed for heavy duty drayage operations. This tractor will have an 80000 lb combined weight a 200 mile driving range generates more than 670 horsepower will only emit water vapor and is operable with only a 12 kilowatt hour battery. This new tractor will help support California’s efforts to reduce greenhouse gas emissions improve air quality and reduce our reliance on fossil fuels.

Toyota’s “Project Portal” reveal comes after Elon Musk CEO of Tesla Inc announced in September of 2016 that Tesla will be unveiling a semi-truck of its own. However carmakers in the past have come across weight issues when trying to develop a plug-in semi-truck. They found that most semi-trucks would require such a large battery that most of the freight carrying capacity would have to be sacrificed.

Provided the success of the test period for “Project Portal” to take place in summer of 2017 Governor Brown of California hopes to have 100000 zero emission freight hauling machines operating by 2030. “By bringing this heavy duty zero emission hydrogen fuel cell proof of concept truck to the Port Toyota has planted a flag that we hope many others will follow” Mary Nichols chair of the California Air Resources Board.