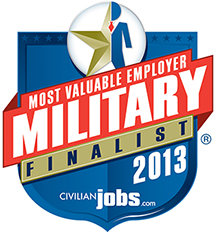 MVEs to be recognized in the month of May to help honor Armed Forces Day May 18 2013.
Atlanta Georgia March 3 2013 â€“ CivilianJobs.com where America’s military connects with civilian careers announced the finalists for the Most Valuable Employers (MVE) for Military today. Marking the fifth year of its publication in 2013 the MVE recognition serves to help military-experienced job seekers and veterans identify the top employers to target for civilian careers.
Crete Carrier Corporation is honored to be named a finalist for CivilianJobs.com’s 2013 Most Valuable Employers Award said Tim Aschoff Chief Operating Officer at Crete Carrier Corporation. With so many service members returning home and to the civilian workforce we are proud to support their transition and leverage the unique skills and experience our military heroes have to offer.
Receiving more MVE submissions than any previous year tells us that employers are learning and appreciating the impact of hiring our nation’s former military said Pete Charest Director of CivilianJobs.com. We regularly host this talent pool of adaptable and highly-capable individuals at our CivilianJobs.com Job Fairs and are encouraged and excited to see them being sought after more and more frequently.
The 2013 Most Valuable Employers (MVE) for Military was open to all U.S.-based companies. The finalists were selected based on surveys in which employers outlined their recruiting training and retention plans that best serve military service members and veterans. Winners will be selected from this pool of finalist companies and will be announced April 28 2013. In addition to being recognized in the May issue of Military Transition News CivilianJobs.com’s world-wide military base newspaper winning employers will also be displayed on the CivilianJobs.com web site.
About Crete Carrier Corporation
Founded in 1966 Crete Carrier Corporation along with operating division Shaffer Trucking and wholly-owned subsidiary Hunt Transportation Inc. ranks as one of the largest privately owned trucking companies in the country offering a full range of transportation services to our customers.
For more information about Crete Carrier Corporation please visit www.CreteCarrier.com.
About MVE
The CivilianJobs.com Most Valuable Employers (MVE) for Military serves to help military-experienced job seekers identify the top employers to target for civilian careers. MVEs are selected annually based on those employers whose recruiting training and retention plans best serve military service members and veterans. The MVE recognition is produced by CivilianJobs.com where America’s military connects with civilian careers. CivilianJobs.com with parent company Bradley-Morris Inc. (BMI) the largest military-focused recruiting firm in the U.S. together deliver the largest military-to-civilian footprint available to companies seeking to recruit and hire from the military talent pool. BMI is based in metro-Atlanta Georgia.
About Military Transition News (MTN)
Published since 2005 Military Transition News is a bi-monthly multi-media publication (print / e-mail / web) featuring practical information for job seekers including resume and interviewing tips transition planning and strategy recommendations company profiles and advice from transition experts. MTN is distributed to military bases worldwide via military transition classes through Military Transition Offices (TAP and ACAP) military hospitals USO centers and email distribution.
Contact
Andrew Brabec Director of Communications
400 NW 56th Street
Lincoln Nebraska 68528
402-479-8751 (o)
[email protected]
About The Author
Crete Carrier Corporation