ATA Wants to Pump the Speed Limit Down to 65 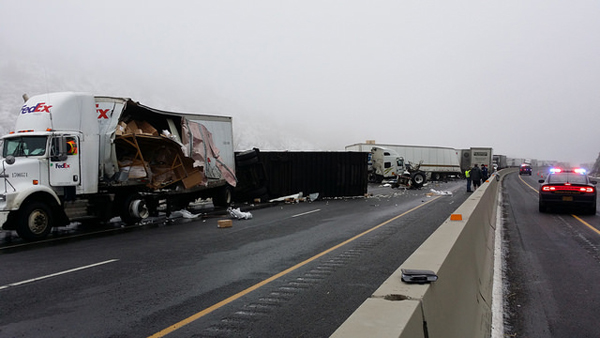 For the second time since 2006 the American Trucking Association (ATA) has urged the U.S. Department of Transportation (DOT) to mandate a strict speed-limit of 65 miles per hour on large trucks.

The ATA is pushing for every truck to require governors in hopes to create a safer highway. With the speed limiters in place trucks will not be able to drive above 65 mph. Although the DOT stated in January 2011 that they would enforce the electronic speed limiters they have yet to move ahead with the proposal.

Proponents of the strict speed limit believe that such large heavy vehicles should not be given the same freedom as smaller more compact cars.

ATA’s CEO Bill Graves states that speeding is the cause of nearly 30 percent of all fatal crashes and the 10 mph decrease from 75 to 65 would allow consume 25 percent less fuel for heavy-duty diesel vehicles.

Approximately 70 percent of trucks on the road already carry governors to ensure a strict speed limit. Graves states that the number is not high enough.

However Norita Taylor the spokeswoman of the Owner-Operator Independent Drivers Association (OOIDA) offers a different view on the issue. Taylor believes that this will cause more congestion on highways stating that “traffic is safest when vehicles travel at the same relative speed…speed limited trucks on highways mean rolling road blocks “.

According to the reporters at DC Velocity truck drivers remained either neutral or supported the proposal.