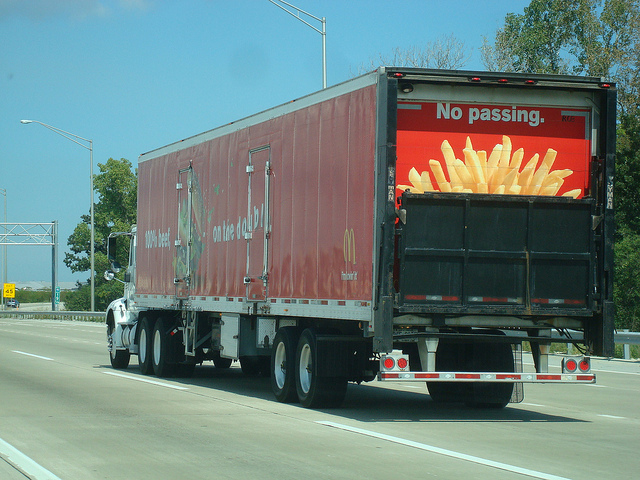 As you know truckers are placed in difficult environments and spend nearly half the day behind the wheel which leads to a staple diet of fast food and a lifestyle of inactivity along with other unhealthy habits. Sound familiar?

According to a study conducted by the FMCSA when compared to the national working population long-haul truck drivers are more than twice as likely to be obese (69% vs. 31%) morbidly obese (17% vs. 7%) and smoke cigarettes (51% vs. 19%).

Furthermore the study established a disturbing correlation between a truck driver’s health and the safety of every driver on the road: “87 percent of crashes involving truckers stemmed to some degree from driver error. Twelve percent of these cases were because the driver was asleep [due to sleep apnea] had a heart attack was in diabetic shock or had some other health problem.”

Chad Hoppenjan the director of transportation safety services at Cottingham and Butler estimates that 10 to 25 percent of preventable accidents were caused directly by poor health. Obese drivers are 55 percent more likely to be involved in a crash during their first two years on the road compared to drivers who are of a normal weight.

As these startling statistics provide enough evidence to show that a trucker’s poor health negatively affects the safety of others along with the longevity of their career a much needed shift towards a healthier lifestyle has begun to take place.

Con-way recently hired 46 full-time wellness coaches in an effort to improve their drivers’ health. Bob Petrancosta the VP of Safety says that Con-way has seen a 32 percent reduction in workdays lost to injuries. Long-haul trucker Bobby Anderson lost 65 pounds in a widely-reported story regarding his switch to a lifestyle of exercise and vegan diet — all accomplished while on the road.

The National Institutes of Health and the Oregon Health and Science University are rallying in an effort to preserve the lives of truckers and their trucks. The NIH and OHSU have partnered to develop a program called SHIFT (Safety and Health Involvement for Truckers) which encourages and aids truckers in a healthier lifestyle such as weight-loss competitions interactive health screenings and motivational phone calls during trips. Participants of the SHIFT program have lost an average of 7.8 pounds so far in the past six months.

These are the changes that the NIH and OHSU are hoping to see. As they continue to receive additional funds their project is budgeted to run until 2016. Since 2011 the National Institutes of Health has spent over $2.6 million in an effort the save the lives of truckers and their trucks.